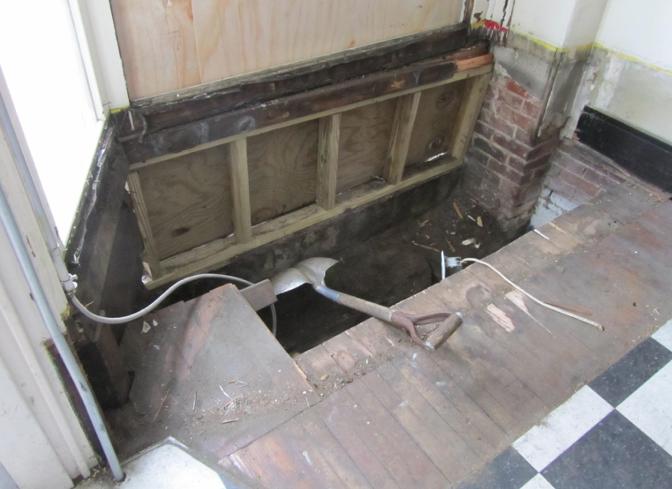 By Phyllis A. Muzeroll
e-Ticker News
CLAREMONT, NH–Without a doubt, this hasnʼt been how Mike Hammond and Codi Raymond expected to spend the holiday season working at their business, Farro Deli, a business they have only owned since November 1st. On December 17, an out of control car sped down Pleasant Street, barreled through the bull pen and hit the Moody Building, taking out a main cast iron pillar and a supporting one flush with the building, totaled another car and caused significant damage to the part of the Moody housing the deli. The car also took out one of six granite posts in front of the Moody, causing it to travel like a missile into a section of the deli below a front window. A sign in the bull pen was also stuck, and its post was broken in half, with part of it with the sign driven into the ground across the street beneath Farro and the rest of the post shattering the glass front door of the sandwich shop. 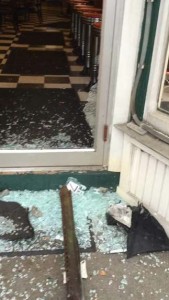 The couple had hoped that the deli would be reopening this week, but structural damage to the building where the deli is located is much more serious than originally thought. As of mid-week last week, there was a big hole in the floor just behind the large window that was currently boarded up, exposing the stone foundation and more. Hammond and Raymond told the e-Ticker News on Wednesday that they did not yet know when they will be able to reopen; the damage essentially extends to the ceiling of the wellness and massage business located below the deli, meaning that that was going to have to be reinforced.

“There are boards sitting on the sprinkler,” said Hammond, who added that they were told a crew was lined up to start working this past Sunday. Moody Building owner Tony Zullo, who owns the property with Andy Dauphin, has been overseeing the details of arranging for the repair work, dealing with the insurance companies and hiring the crews doing the construction work. Despite the shock of what they have been through and the temporary loss of business, the couple is quietly resigned to the situation and awaiting when they can begin serving their customers again. Itʼs clear that they feel badly for their customers, including the ones contacting them for catering jobs or contacting them to see if they are open for take-out, which they are not at the moment. 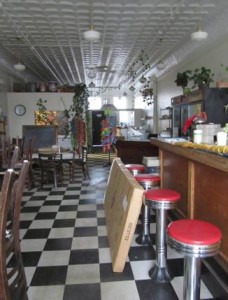 “It sounded like a bomb went off,” said Raymond, when asked what the experience had been like the day of the incident. “Things were falling and the noise got louder and louder. ”Broken glass from the large picture window and front door went flying everywhere, even as far as the door to the kitchen, at the back of the shop. A flower box at the front of the window was also destroyed, causing “a cloud of dirt” to blow into the deli, said Hammond. They disposed of all the open food that had been in the deli that day due to the amount of glass everywhere. Fortunately, the lunch rush had ended and the second wave hadn’t start yet when the building was hit. It was also fortunate that no one was sitting near the front window. Repairs to the front door are temporary as the door frame was also damaged.

Hammond said it took four DPW workers to remove the “almost one-ton” granite post from beneath the deli window; they asked for and were given the mangled No Parking sign that traveled from the bull pen to under their business as well.

When they know the date of reopening, Hammond and Raymond will begin re-ordering the produce and other items they will need to get up and running again. They have kept the successful menu from the previous owners and will be adding a few new things of their own. They were just planning to add ice cream to the menu when disaster struck, said Hammond.

“We can recover,” said Raymond. “We just want people to know that weʼre not open yet.”