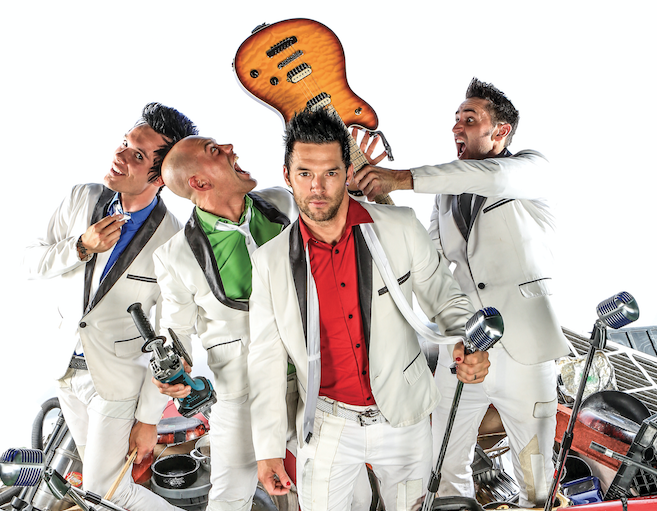 Legendary New Hampshire drumming group Recycled Percussion is back in the Granite State on Saturday, June 22, to rock the Claremont Opera House.
You may have seen them impressing the judges on “America’s Got Talent”, or even seen them perform in Las Vegas or maybe as they opened the 2017 Super Bowl or on their award-winning TV show, “Chaos & Kindness”.

Maybe, just maybe, you are one of the few that have not seen this amazing show. Whether it’s your first time or your tenth, a Recycled Percussion show always rocks and amazes with its high-energy performances.
Formed in 1994 in New Hampshire at their high school talent show, Recycled Percussion’s first performance gave birth to the style of music now known as “Junk Rock”. The group was originally formed in Goffstown.  Now based in Las Vegas, this small-town band has built their show into one of the more powerful live performances in entertainment. During every show, the band mixes their gritty assault on buckets, power tools or anything else they can get their sticks on with a sense of humor and gravity defying athleticism.
Don’t miss this show packed full of surprises and crowd favorites in an incredible turbo-charged performance. Be part of a one of a kind show and relive the journey of the local boys all the way to the entertainment capital of the world, Las Vegas.
The band paid a visit to Stevens High School in Claremont in September of 2017 to film an episode of “Chaos and Kindness”, which features the band visiting cities and towns to promote acts of kindness while playing their special brand of music. They visited classrooms to talk with the students, set up a slip and slide on the second floor of the high school for students and then invaded the gym for a loud and fast-paced concert. They also visited other schools in Claremont before heading back to Las Vegas that day.
Tickets are $37.50 and can be purchased online at www.claremontoperhouse.org where you can print at home or leave at will call, by phone at 603-542-4433 or in person at the Opera House Box office in City Hall Complex just inside the front door at 58 Opera House Square.