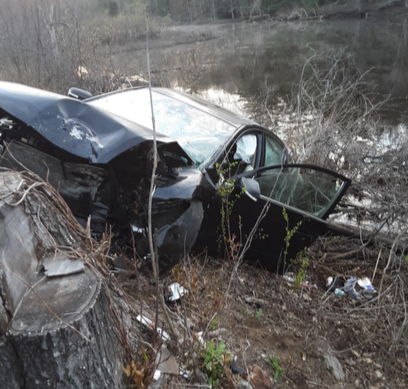 Posted By: Phyllis Muzerollon: May 09, 2019In: Local, News
Print Email

CROYDON, NH–On Thursday May 9, at approximately 05:15 a.m., the New Hampshire State Police-Troop C responded to a motor vehicle collision which occurred on Route 10 in the town of Croydon, NH. The crash was located in the area of Spectacle Pond and initial information indicated the vehicle was partially in the pond, said authorities.

Once on scene, it was determined that the collision had occurred at approximately 12:00 a.m. and involved a 2008 Nisan Altima which had been operated by Elizabeth Ball, age 24, of Newport, NH, said the NHSP. Ball was seated in the operator’s seat when first responders arrived on scene. There were no other occupants.

According to the NHSP in a written statement, “The preliminary investigation indicates that the Altima was southbound on Route 10 when it crossed into the northbound lane of travel before leaving the roadway and colliding with a tree stump near the edge of the pond. As a result of the collision, Ball received serious but non-life-threatening injuries and was transported by ambulance to Dartmouth Hitchcock Medical Center in Lebanon, NH.”

Ball was subsequently arrested for Aggravated Driving Under the Influence of Drugs. Ball was released on personal recognizance to be arraigned on the aforementioned charge in Sullivan County Superior Court on May 15, 2019.

This collision remains under investigation at this time. Anyone who may have further information related to this crash is asked to contact Trooper Edward Horton via Troop C dispatch at 603-223-8494 or email at edward.horton@dos.nh.gov.