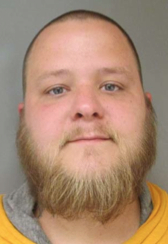 LEBANON, NH–On June 7, Lebanon Police Detectives, in conjunction with New Hampshire Probation and Parole, made contact with two males in a parking lot of a West Lebanon business after observing suspicious activity. After developing further information, the officers sought a search warrant for a truck involved, which was granted, and subsequently executed. Approximately 200 bags of heroin were located inside.
On June 8, Keith Clausen, age 34, of Enfield, NH, was arrested and charged with Possession of Narcotic Drugs with Intent to Sell, a Class B Felony. Clausen refused the services of a bail commissioner and was lodged at the Grafton County House of Corrections. He will be arraigned at the Lebanon District Division, New Hampshire Second Circuit Court on June 9.