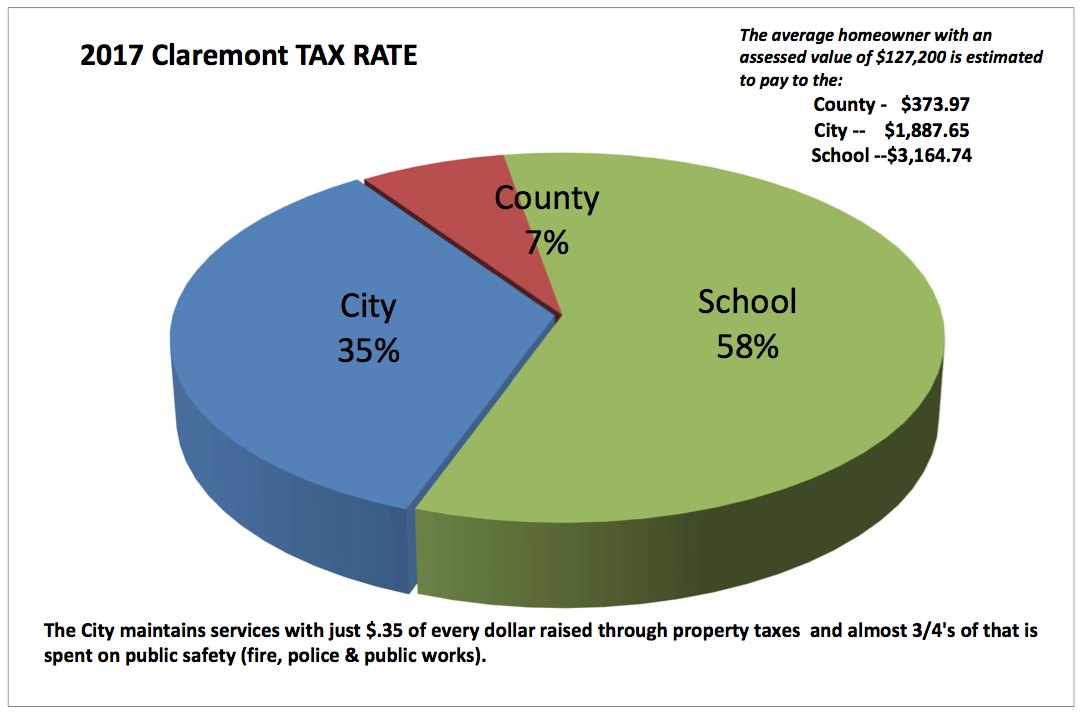 The NH Department of Revenue Administration has set the 2017 tax rate for Claremont, City Manager Ryan McNutt announced Tuesday afternoon. The 2017 rate was set at $42.66, which was $.19 less than anticipated, he said. The average assessed home in Claremont is $127,000, and the average tax bill for a residential property is $5,417.82 for 2017, which covers all services delivered by the city, school and county, said McNutt.
“The city portion of the tax rate has been set at $14.84 per $1,000 in assessed value. During the Fiscal Year 2018 budget process the city finance administration must make a series of projections related to revenues and expenditures. The finance staff tends toward conservative projections on what revenues the city expects to receive during the fiscal year,” said McNutt. “Those conservative projections meant we anticipated setting the city portion of the tax rate at $15.03. Stronger than anticipated revenues allowed for setting the city portion of the rate $.19 lower than that projection.” He added, “Through conservative budgeting we have reduced the costs of operations.”
The school portion of the tax rate is $24.88, while the county’s is $2.94.
“This drop in the tax rate is indicative of the work that the City is doing to recapture lost valuation by focusing on economic growth while holding the line on expenses,” explained Mayor Charlene Lovett. “We know that there is much more work to be done, but we are making progress in the right direction.”
The City’s total assessed property value is $701 million, an increase of about $5 million from last year due to a slowly recovering residential market, said McNutt.
The 2016 tax rate was set at $42.62, with the city portion being $14.86; the school, $24.90 (local, $22.48, state, $2.42); and the county, $2.86.