On June 6, at approximately 3:00 p.m., Vermont State Police Troopers conducted
a motor vehicle stop for speed, on Interstate 91 northbound, near mile marker
36, in the town of Rockingham.  According to the VTSP in a statement, during the course of the traffic stop, probable cause was developed to believe criminal activity was allegedly occurring.  Troopers conducted a consensual search of the vehicle and allegedly located one bag of heroin on Miranda Goodell’s person (age 31, Charlestown, NH);142 bags of heroin were allegedly secured in a tissue box that belonged to Kerri Yaqoob, 28, Charlestown, NH, said VTSP.

Both females were arrested and transported to the Westminster Barracks for processing.  Yaqoob was also found to be in violation of conditions of release, stemming from a prior heroin possession arres 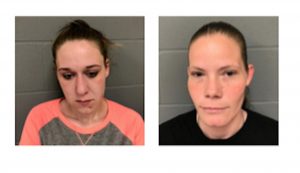 t, said law enforcement.  Both females were issued citations to appear in court at a later date.