CLAREMONT, NH–Since Oct. 5, the Claremont Police Department has been investigating 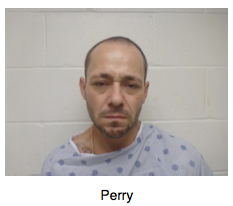 two commercial burglaries that occurred during the late evening of Oct. 4th and/or early morning of Oct. 5. The two businesses were T-Bird Mini Mart on Charlestown Road and the Head Start Preschool on Charlestown Road. On Oct. 26th the Claremont Police Department responded to a report of a commercial burglary at Howe Motors on Charlestown Road. Based on the ongoing investigations of these burglaries, the Claremont Police Department began to monitor Marro Home Center. On Nov. 8, shortly after 1:30 a.m., officers discovered a burglary in progress at Marro Home Center. Found in the building was Mark Perry, 37, Claremont. Perry was ultimately arrested for burglary (Marro Home Center). He was arraigned in the 5th Circuit Court, Claremont District on Nov. 9, at which time a plea of not guilty was entered. Bail was set in the amount of $5,000 cash only. 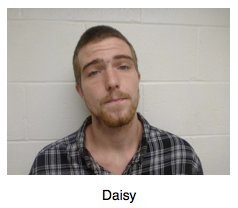 On today’s date, a search warrant was executed at 112 Charlestown Road, Apt. #4, as part of the investigation into the burglaries noted above. As a result of the search warrant and the ongoing investigation, Justin Daisy, 25, Claremont, was arrested on two counts of conspiracy to commit burglary (Howe Motors and Marro Home Center) and one count of possession of a stolen firearm. Daisy will be arraigned in the 5th Circuit Court, Claremont District Division on Nov. 11.
The investigations are ongoing, and Perry is likely to face additional charges, said Claremont Police Chief Alex Scott.