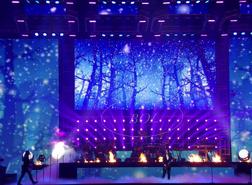 This month, instead of reviewing a movie, I’m reviewing a concert: Trans-Siberian Orchestra, currently on national tour performing its Winter Tour 2015: The Ghosts Of Christmas Eve. They picked up Tchaikovsky and smacked him around, ever so lovingly but with vigor normally only found in 80’s heavy metal.

If the angels didn’t play harps, they would play violins and electric guitars. The Heavens would rock with the sounds of ecstasy. The electricity in the air was 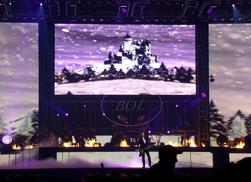 manifest by the excitement of the crowd. Those who attended varied from colorful to families. I had the pleasure to meet a grandmother and her grandson, who has angelman syndrome and will never be able to speak. This rare congenital disorder is a mental disability with jerky movements and delayed development. It is caused by the absence of certain genes on the copy of chromosome 15. In appearance, it looks very similar to autism. The grandmother said she takes her grandson to TSO’s concerts every year. It was all this reporter could do not to tear up as she relayed how much these concerts and TSO’s music impact this young man, giving him a joy that you and I will likely never fully know.

As if the fantastic music that this group gives to the public wasn’t enough, TSO proved themselves to be just as generous as they are talented. The evening began as two of the artists emerged on stage to make a donation to a local children’s organization in the amount of $1 for every ticket sold in Oklahoma. It was truly a fitting act from TSO with it being only two days until Christmas. The show itself was filled with the heart of the season.

The songs and music told the story of a teenage runaway who sought shelter in an old, abandoned theater. While there, she was greeted by the ghosts of the past who showed her the meaning of life: love. No spoilers here though. To find out the rest of this powerful story, attend TSO’s final performances of the Winter Tour or buy their DVD for yourself. 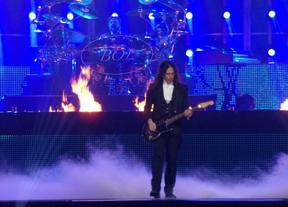 Two thousand years ago, at the time of Jesus’ birth, the wise men brought gifts of gold, frankincense, and myrrh. Although not as formal a gift as those, today TSO brought their gift of music: powerful and majestic… truly a gift worthy of a King. I give TSO 5 crosses for one main reason: I can’t give it more. TSO has taken classical music to a whole new level by mixing it with modern rock, and they truly have something for everyone.