The Case Of $240 And The Trump Campaign

Posted By: Phyllis Muzerollon: May 10, 2016In: Local, News
Print Email

CLAREMONT, NH–For some, it was a tempest in a teapot. For others, it drew outrage. “It” apparently started with a long tirade posted on Facebook on May 2 claiming that the Trump campaign owed the City “thousands of dollars” for expenses incurred when “The Donald” held a rally at Stevens High School on January 5. According to SAU Superintendent Middleton McGoodwin, the campaign did owe $240 for renting the school. He provided the invoice which showed an application for use of the building on the date of January 5. In addition, Claremont Fire Chief Rick Bergeron confirmed that the campaign owes the City $838.65 for services his department provided.
“For such events the fire department pre-approves the proposed set up plan,” Bergeron told the e-Ticker News.  “That is, whether chairs are used, or tables, or both, or none, and calculates the occupancy rate as determined by the Life Safety Code.  At this point a maximum number is attached to the event.  The Fire Department does this as a matter of normal day to day operations and there is no charge.  At the Trump rally, the fire department also placed on duty firefighters at the entrance points and controlled what the actual maximum head count would be by monitoring the number of people who actually entered.  All went well and the firefighters also kept the Secret Service advised as to when the venue was about to reach capacity, as they would restrict entry after that point.  This activity is what the fire department normally charges out as detail pay, which in this case, is what was billed to the Trump campaign.” 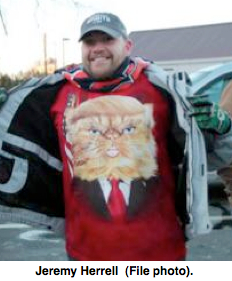 One individual outraged, that the Trump campaign was being singled out, was Claremont Trump supporter Jeremy Herrell, who made a point of paying the $240 bill himself. Herrell, using his cell phone, videotaped himself going to the SAU office and writing out a check to cover the payment. In the video, posted on YouTube on May 4th, he stated in part, “By the way, I owe more than that on my
electric bill.” He stated that the campaign was “not Trump’s campaign, it’s millions and millions and millions of people’s campaign and we all have a duty and I’m going to do my duty right now.”
When or if the City might get reimbursed for the services provided by the fire department is unknown.