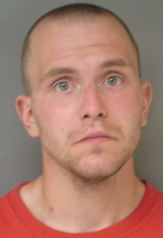 business check at a local convenience store when he was approached by staff who reported three subjects were acting suspiciously in the store and the men’s restroom. The officer made contact with a male subject in the restroom and while speaking to him, the male attempted to dispose of four bags of heroin in the toilet. Two other subjects were found outside in a vehicle where drug paraphernalia was located.
Sean T. Hurd, age 26, of Brandon, VT, was arrested and charged with Possession of the Narcotic Drug Heroin and Falsification of Physical Evidence, both Class B Felonies.
Hurd was held on $1,000 cash bail and transported to the Grafton County House of Corrections to be arraigned at the Lebanon District Division, New Hampshire Second Circuit Court today.