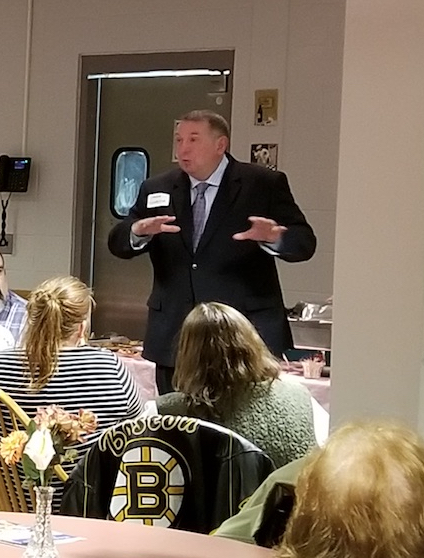 The SAU 6 Board made the following announcement Saturday night:

SAU 6, following its Board Meeting this past Thursday, is pleased to announce the appointment of Michael Tempesta as the next Superintendent of Schools, to take the helm on July 1, 2019.

The SAU 6 Superintendent Search Committee has been meeting since November 1, 2018, and engaged in a very rigorous process to:

1. Develop a list of measurable SAU 6-specific superintendent success factors/competencies that included input from the community through a widely distributed survey.

2. Screen the 15 candidates application and narrow the pool of those qualified to thebest five.

3. Conduct a two-hour interview to assess the five against the success factors and reduce the number to the three most qualified.

4. Conduct an intensive three-hour interview of the three to identify two finalists for the position of SAU 6 superintendent.

Mr. Tempesta toured the schools in SAU 6 last Monday, briefly meeting staff and students, prior to his introduction to the community, school board, and staff during a public “Meet and Greet” at the Sugar River Vocational Tech Center. The evening’s event was well attended and the public had the opportunity to ask questions and to provide written feedback to the Search Committee in the final stages of its work. In his letter of application he stated it was “with enthusiasm, vision and confidence” thathe applied for the position of Superintendent of Schools.Furthermore, he stated that unifying staff and stakeholders and leading positive school change will be important in regard to the current challenges facing SAU 6.

According to his colleague in the Saugus Public Schools, ”as Superintendent, Mike consistently demonstrated a genuine concern for, interest in, and understanding of our staff, students, families and community. He understood the needs of the District, but,more importantly, he was able to make suggestions and take actions that enabled us to appropriately service all students. Mike led by example and earned the respect of the Saugus Public School’s Leadership Team.”She goes on to state, “Mike is a skilled, committed, and capable school leader. Nothing has served Mike better during his Superintendent term then good judgment and consistent communication with all. He is a credit to our profession and will be a welcome addition to your school system.”

As a former resident of New Hampshire, Mr. Tempesta and his family are looking forward to relocating back to the White Mountains. Mr. Tempesta’s experiences as a teacher, coach, principal, superintendent and now educational collaborative executive director for the last twenty-five years will serve him well in the leadership and vision of SAU 6.