Posted By: Phyllis Muzerollon: March 21, 2018In: Obituaries
Print Email
Reverend Father Stanley J. Piwowar, “The Tootsie Roll Priest”, went to live with God on Tuesday, March 20, 2018, at the age 92.Father Stan was born to Polish immigrants Andrew and Teckla Piwowar in North Walpole on September 9, 1925. Father Stan had two brothers, William and Frank, of which he was the youngest, and three sisters, Helen, Mary and Sister Mary Fidelia, all of whom predeceased him. 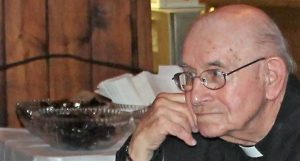 Father Stan found the church in disrepair and in debt. But he was determined to make it one of the best little churches in New Hampshire. Along the journey, he gained respect and love of Claremonters. His church was full every Saturday night and Sunday morning, and his parishioners knew he was available to them at any hour. Daily, Father Stan made rounds at the hospitals and nursing homes, Catholic or not, he gave blessings and a handful of Tootsie Rolls. Everyone attended the lawn and turkey parties at St Joseph’s. Father used these fundraisers to repair the church to its present-day status.

Helping where he could in Claremont, he found himself involved in several organizations and societies, including board member for Valley Regional hospital, Chaplain of the Claremont Fire Department for 38 years, supporter of the Claremont Opera House, Board of Directors of Claremont Senior Center, Knights of Columbus, Assembly 0635, 56 years as Faithful Friar, Chaplain to the Junior Catholic Daughters for 37 years, and worked with Alcoholics Anonymous and AARP. He was also a principal sponsor of St. Joseph’s Sports Night. He was honored in 2000 as the Citizen of the Year.

He took up residence in his own apartment in the home of Ron and Marilyn Gilbert until January 5, 2017, when he moved to the Bishop Peterson Residence in Manchester.

Father Stan continued to say Mass every day. He also loved watching the Red Sox and Patriots games. He kept an interest in St. Joseph’s and Claremont news. Father also said Mass at Elmwood. And yes, the Tootsie Rolls were still everywhere, and blessings were bountiful.

On Thursday, March 22nd at 2 PM the Right of Reception of the Body will take place at St. Joseph Church. He will lie in Repose until 7 PM. Beginning at 7 PM The Mass of Jesus Christ High Priest will be celebrated.

On Friday, March 23rd beginning at 8 AM the body will lie in Repose until 11 AM. A Mass of Christian burial will be celebrated at 11 AM by Bishop Peter A. Libasci, Bishop of Manchester. Burial will follow in St. Mary Cemetery.

Donations may be made in his memory to the Felician Sisters, C/O Mary Laureann, 1315 Enfield Street, Enfield, CT 06082.

We will miss “our” Tootsie Roll Priest, but he is happy with God and will forever be in our hearts.