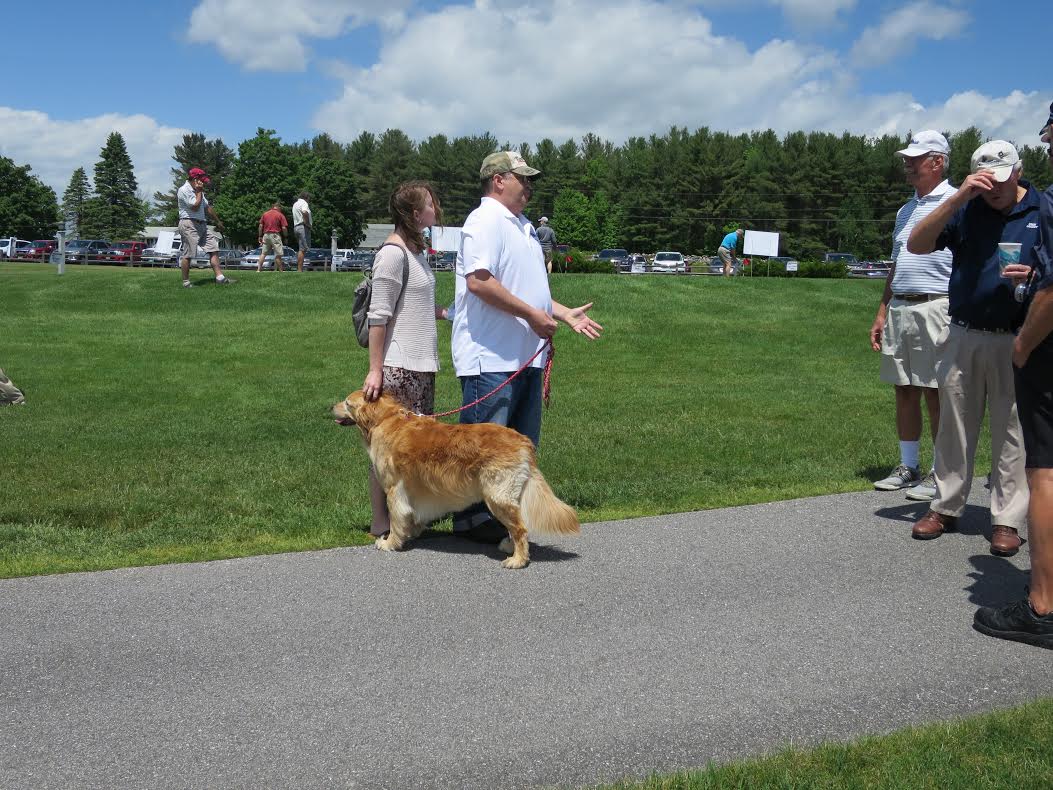 CLAREMONT, NH–At the Friends of Veterans of New Hampshire and Vermont (FOV) Charity Golf Tournament, held today, June 6, at Baker Hill Country Club in Newbury, NH, Sergeant Mark Lawton, was the recipient of a “Service Dog” from the FOV and the Red River Charitable Foundation (RRCF). Mark is a former Army sergeant who was severely injured by an IED explosion while serving in Iraq in July 2002. As a result of this explosion Mark suffered from PTSD, however due to continued severe headaches he was later diagnosed as having a Traumatic Brain Injury (TBI). As a result of his injuries Mark was medically discharged from the Army in 2007.

Sergeant Lawton, along with his wife Mary and son Solomon attended the presentation with Mark’s “Helper Dog” Luna. Mark explained the difference between a Helper Dog and a Service Dog. He described that the roll of the Service Dog as being more extensive than a helper dog. The main roll being to help the owner during stressful public situations where the owner is uncomfortable, the dog is trained to sense the stress and guide the owner out of the it.

Sergeant Lawton’s dog was obtained by and will be trained by the Assistance Canine Training Service (ACTS) in Conway, NH. They will be training the dog over the next several months. They will eventually work with Mark and the dog till their partnership is formed. At that time Luna will be retired. This fits with in the norm of eight years’ service for these dogs, but he will remain as a member of the Lawton family.

Kim Vacca, RRCF Director, said, ” The Red River Charitable Foundation is honored to be the major sponsor of the Friends of Veterans Golf Tournament. FOV is a wonderful organization and the help they provide to area veterans is critical. Our partnership with them has grown and evolved over the years and we expect to assist in Sergeant Lawton’s Service Dog. The Service Dog initiative is a great program and we are anxious to increase it in coming years to assist other veterans.”