The Newport Police Department has announced the arrest of a Newport resident, as part of a brief investigation into the cultivation of marijuana.

The investigation and subsequent arrest is the result of the Newport Police Department receiving information on the health and welfare of a South Main Street resident who had made suicidal threats. While looking for the subject of those threats, officers observed the “elaborate growing” operation. Based on those observations, a search warrant was sought and obtained for the residence and was later executed. The search resulted in the seizure of approximately 25 marijuana plants, all ranging in height from one to three feet tall. Also seized were growing implements to in aid in the cultivation as well as paraphernalia for smoking the drug.

Mature marijuana plants have the ability to produce up to one pound of marijuana per plant with an average value of approximately $3,000 per pound, said the Newport Police Department. The plants in this case were not yet mature but were well established. 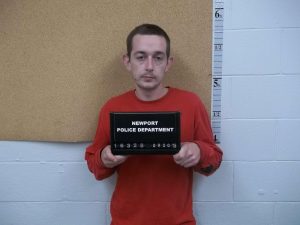 As a result of the investigation, and evidence obtained from the search warrant, Jonathan Weaver, 28, was arrested and charged with the manufacture of controlled drug, a class B felony. Class B felonies can be punished with a minimum of 3 ½ years, and up to a maximum of 7 years in prison and a fine of up to $2,000. Weaver was initially held on $10,000 cash bail and was later arraigned in the 5th Circuit Court, Newport District Division on September 21st. At that time his bail was set at $2,500 cash pending a probable cause hearing on October 3rd at the Claremont District Division of the 5th Circuit court.

According to Chief Burroughs, “The Newport Police Department will continue to aggressively investigate any case involving the cultivation, sales or use of drugs in Newport.”