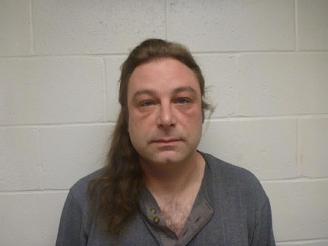 CLAREMONT, NH–Last Wednesday at approximately 9:20 a.m., the Vermont State Police were pursuing a GMC Canyon pickup truck north bound on Route 5 from Springfield, VT, towards Ascutney, VT. At the Route 5 and Route 103 intersection, the pickup truck headed into Claremont on Main Street. VSP continued to pursue the truck into Claremont with New Hampshire State Police assisting along with support from Claremont Police and Sullivan County sheriffs. The truck failed to stop despite being spiked and having a flat tire. The truck ultimately collided with another pickup truck when making a turn on Main Street near North Street. No one was injured in the collision, but both trucks were damaged.

The pursued truck continued through the parking lot at Lambert Supply and ultimately came to rest at the end of the driveway/lawn area east of the the Lambert Supply driveway, at which point the driver was taken into custody. The driver is identified as Joseph Romano, 38, of Swanzey, NH. He has been charged in New Hampshire with Felony Reckless Conduct, Misdemeanor Disobeying an Officer and Misdemeanor Contempt of Court. Romano also faces charges in Vermont. He was held at the Sullivan County jail pending his arraignment in the 5th Circuit Court, Claremont District Division, December 24th.