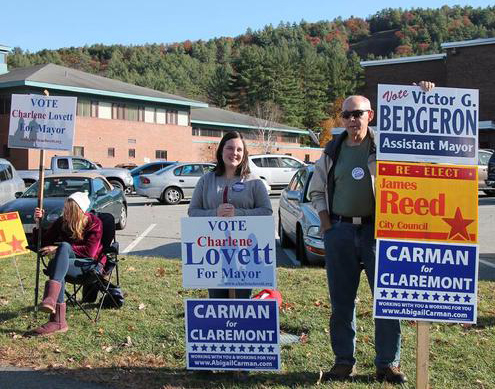 CLAREMONT, NH–When the dust settled and the votes were counted following Tuesdayʼs City Council election, Claremont learned that it had elected a new mayor, kept the assistant mayor and brought back two former councilors and added one new face. Mayoral candidate and sitting councilorCharlene Lovett beat incumbent Jim Neilsen by a large margin, 1154 to 665, despite an organized effort to defeat her that those opposed said was based on her record as a past StateRep. Sitting Assistant Mayor Vic Bergeron beat out opponents, Councilor Kyle Messier and A-J Maranville, 738 to 604 and 463 respectively, for the assistant mayor seat. “I can say that I think the city will be well served by Mayor-elect Lovett,” Neilsen told the e-Ticker News. “I was disappointed that councilor James Reed did not get elected as I felt hehad served the city with diligence in his first term. I have no regrets and thank the citizens for their support.”

Lovett commented on the election, telling the e-Ticker News that “I am overwhelmed by the community’s support in electing me as the next mayor. It has been a privilege to serve on the current Council and with Mayor Nielsen, and I look forward to continuing their work in moving Claremont forward. It is my objective to hit the ground running in January. So, I will be working with the current Council and the NH Municipal Association to create an orientation program that will ensure a smooth transition and everyone is well prepared to begin their term next year.” Messier told the e-Ticker News that “It has been a pleasure serving the community as a city councilor for the past eight years. I would like to thank all of those who have provided support and encouragement over the years and wish the next city council continued success in working together to move Claremont—the city that has so much potential — forward in a positive direction.” The City re-elected Keith Raymond, 997, and John Simonds, 791, to At-Large seats while adding Bruce Temple, 969, and Allen Damren, 1046, to the council. Temple has previously served on the council and is the former DPW Director; Damren is the former business manager for the Claremont School District. Others running included Abigail Carman, who received 702 votes; Ian Gates, 478; Thomas LaCasse, 542; and incumbent James Reed whose 663 votes were not enough to keep him on the council. “I feel very honored to have been elected to the Claremont city council on Tuesday,” Damren told the e-Ticker News. “I appreciate the trust voters have placed in me and will do my best to continually earn and earn again that trust. Thank you, Claremont voters! We have a lot of work to do as a City and as a city council, but I know everyone is up for the task. Certainly economic development is priority number one and as the council works its way through setting goals and objectives I’m sure that economic development will remain priority goal one. I’m looking forward to joining the council in January. Let the work begin!” Incumbent Carolyn Towle ran unopposed as Ward 1 Councilor, receiving 405 votes as did Ward 3 Councilor Nick Koloski, garnering 479 votes. In Ward 2, Scott Pope, a former mayor, defeated Paul LaCasse, 551 to 210. Total ballots cast in Tuesdayʼs election: 1860, which worked out to a voter turnout of 31%.