Two loon deaths from ingested lead fishing tackle have been documented in New Hampshire so far this summer. The first lead-poisoned loon was discovered June 17 on Long Pond in Lempster, NH. The loon was already deceased when it was found on the shoreline of an island on the pond. Radiographs at Meadow Pond Animal Hospital showed lead tackle in the loon’s gizzard, and a necropsy found fishing line and two fishing jigs that tested positive for lead. The bird’s body fluids were also tested and showed a high lead level, well above the threshold for clinical lead poisoning.

A second lead-poisoned loon was found on Cold Spring Pond in Stoddard, NH, on July 6. This male loon had been captured and released on July 1 in the course of routine banding. Blood tests conducted the following day revealed high lead levels, and Loon Preservation Committee (LPC) staff and volunteers began monitoring the pond closely. The loon was found deceased on Wednesday, but it likely died over the weekend. A necropsy performed on July 11 showed a lead jig and fishing line in the loon’s gizzard. 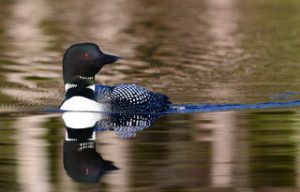 July and August are when lead-poisoned loons are most often found, which correlates with peak lake use and fishing in New Hampshire. The NH Fish and Game Department and the LPC urge anglers to stop using lead tackle to protect loons and other lake wildlife. Poisoning from lead fishing tackle is the leading cause of adult loon mortality in New Hampshire. According to the LPC, the loss of so many adults from this preventable cause of mortality has inhibited the recovery of loons in New Hampshire.

“Because loons do not breed on average until 6-7 years of age and have low reproductive success, it is important that adult loons survive for many years to produce surviving young,” said Harry Vogel, Senior Biologist and Executive Director at LPC. “The loss of an adult loon may also result in the loss of that loon’s nest or chicks, further negatively impacting the population.”

These loon deaths come just weeks after the implementation of a new law strengthening the ban on lead fishing tackle in the state. New Hampshire was the first state in the nation to restrict the use of small lead fishing tackle in lakes and ponds beginning in 2000. Subsequent legislation to restrict the use of this tackle in all freshwater in New Hampshire took effect in 2005, and the sale was restricted beginning in 2006. A new law implemented on June 1, 2016, increased protection for loons and other waterfowl banning the sale and freshwater use of lead jigs weighing one ounce or less, regardless of length, adding to the previous ban on lead sinkers one ounce or less.