One on One Countryside Chat With…Bernadette O’Leary: Living With Lyme Disease

There are many illnesses that baffle many of the experts. Some of these even spark debates about whether or not they really exist. However, for the sufferers of such illnesses, they are very real indeed. To tell them their illness is not real is to also tell them that they are not really sick. These ailments impact the lives of those who suffer from them on a large scale. These conditions tear apart not only the bodies of those who live with them daily, but also relationships and lives. 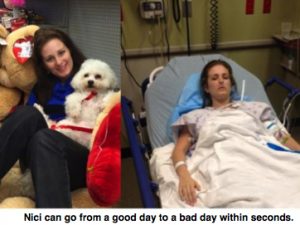 One such illness is Lyme disease. Meet 30-year-old Nici Davenport who has battled Lyme disease for many years. Her dream in life was to get married and have a family, but unfortunately her medical struggles have stolen those dreams. Not only have her hopes and dreams been dashed, but her husband found himself unable to deal with her being so sick all the time. He left her to face her struggles alone. While that might anger you, it’s important to understand that this is not at all rare. Many marriages and families are torn apart by the fear, uncertainty, and difficulties that medical struggles bring. These struggles put great challenges on people, both emotionally and financially. It pulls couples in multiple directions and often creates resentment when each feels the other doesn’t understand his or her pain. Likewise, with illnesses for which very little is known, there is often the case of the partner not fully believing the sufferer is truly sick. In fact, a common fictitious belief is that doctors know everything and can treat everything. To make matters worse, the expense of tests, travel for specialists, the doctors themselves, and medications are excessively high, leading many into financial ruin.

Nici tells us that Lyme is caused by a tick bite, referring to it as a “deadly bite.” It destroys your body and messes with your brain. It can be cured, but the treatments work best if caught early. Hers took years to diagnose. Lyme also leads to other serious ailments. She was bitten at age 10, complete with a bull’s-eye rash. From there, she began having aches and pains, but she attributed that to the fact that she was a country girl who did country girl things, like riding horses. She started having migraines two years after the bite. She eventually was diagnosed with Lyme and 39 other serious ailments that included horrible seizures and more. She has to use oxygen and wear a heart monitor at times. She has gone from being a working professional with a high IQ to someone with brain fog that is so bad she can’t even think of people’s names who she knows. She has been hospitalized numerous times and was told she didn’t have long to live multiple times as well. However, this woman is a fighter. She continues to fight all of her ailments, and she inspires others to continue their own fights as well. She points out that her immune system was already poor before the tick bite. Not everyone bitten gets Lyme disease, but many others are not as lucky. 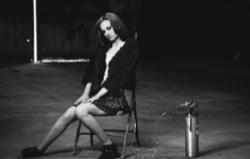 Nici starts her days as we all do: getting ready for her day. This includes using a device called an infrared sauna for detox because she cannot sweat, and she has to use it for an hour a day. Sometimes, she needs help with it because of seizures and passing out. She never has an appetite, so she has to force herself to eat breakfast. Her days are full of doctor visits with multiple doctors. These are just a few examples of her daily routine. The slightest task can leave her winded and weak, yet she strives to live as normal of a life as she can and try to not look sick. By the time she is just barely into her day, she is exhausted. This is living with Lyme.
As we can clearly see, living with Lyme Disease can be devastating. However, what does the medical community say about it? Opinions vary, however Mayo Clinic’s web page states the following: “Lyme disease is caused by four main species of bacteria: Borrelia burgdorferi, Borrelia mayonii, Borrelia afzelii and Borrelia garinii bacteria. Borrelia burgdorferi and Borrelia mayonii cause Lyme disease in the United States, while Borrelia afzelii and Borrelia garinii are the leading causes of Lyme disease in Europe and Asia. The most common tick-borne illness in these regions, Lyme disease is transmitted by the bite of an infected black-legged tick, commonly known as a deer tick.” It goes on to list symptoms to look out for and time frames for when the symptoms occur after the initial tick bite. The list is far too detailed to include here, so please visit their page at http://www.mayoclinic.org/diseases-conditions/lyme-disease/basics/symptoms/con-20019701 to learn more.
I have known this brave lady for a while now personally. I’ve seen how loved ones shun her and abuse her. I have seen how friends and strangers act as though she is imagining it all simply be- cause she has good days where she is able to “live” her life somewhat normally and without looking as sick as she truly is. She has even tried to
return to a hobby of hers, modeling, as a way of raising awareness of the effects of this terrible disease.
It’s heartbreaking how people with Lyme and other misunderstood ill- nesses suffer socially because of ignorance and harsh judgments that result in a lack of a true support system. This lady is always there for others in spite of her suffering. In fact, while chatting for this article, she took her free moment at the end to add anything she wanted to and used it to ask me about how I’m feeling with my own chronic illness. It just shows how generous of heart and lovely this woman is. I’m honored to know her and call her my dear friend.
The important thing to take away from this is that not all ailments are cut and dry. Doctors are not infallible. They can neither know everything nor treat everything. New studies are needed for this debilitating disease that literally breaks down the body, opens doors for other ailments, and destroys lives. There are still many doctors that refuse to acknowledge its existence, in spite of the advances made in its research that have proven it to be very real. Many suffer from this illness with no real help. Research this terrible affliction online today, and see how you can help promote awareness that can lead to better research, better treatments, and perhaps someday, a cure.

O’Leary can be reached at etickernews.bernadette.oleary@gmail.com.