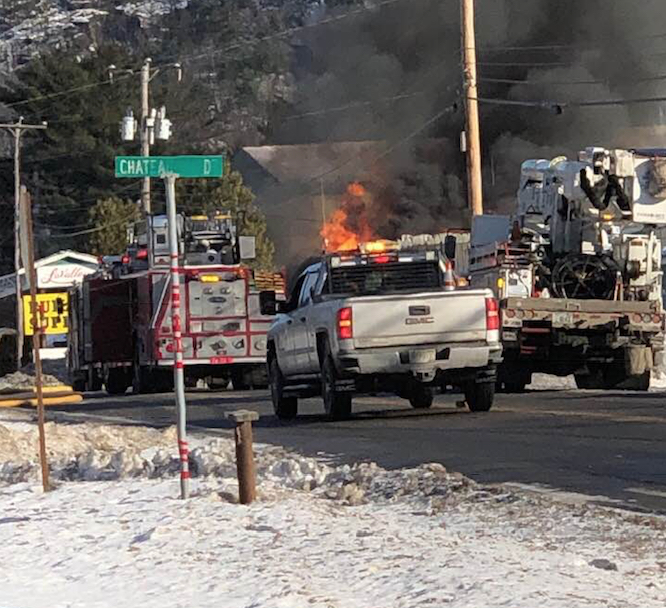 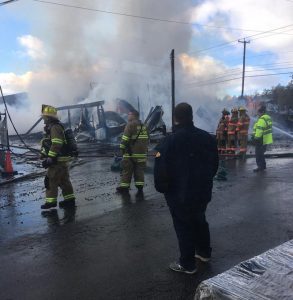 Newport Fire/EMS and Police Departments were dispatched to the scene with the first units reporting that the structure was heavily involved. At 9:36 a.m., the fire was upgraded by Fire Command to a 3rd alarm, bringing in Fire Departments from the communities of Sunapee, Lempster, Claremont, New London, Goshen, Unity, Grantham, Newbury and Ascutney, VT. Route 11&103 was closed, and the Newport Police Department received assistance with detours from the Sunapee Police Department, Sullivan County Sheriff’s Department and the NH State Police. The road was closed for two hours and 20 minutes, reopening to a single lane of traffic at 11:43 a.m.

The fire was deemed under control at 10:49 a.m. Due to the extensive nature of the fire, fire personnel remained on scene for several additional hours overhauling with the use of heavy equipment. “Challenging the responding fire departments was the close proximity of several other structures,” said Deputy Fire Chief David McCrillis of the Newport Fire Department.
“Due to the proximity of buildings, radiating heat caused moderate damage to one adjacent building and minor exterior damage to the main retail store building, but Lavalley’s is expected to reopen for business tomorrow. Building #6, where the fire originated, contained flooring and counter top materials and was deemed a total loss.”

The Country Kitchen Restaurant was evacuated as a 3rd alarm was called.

The exact cause and origin of the fire is not known at this time and it remains under investigation by the Newport Police and Fire Departments; it is not considered suspicious in nature, said McCrillis.

One Fire Fighter was transported from the scene by the Newport Ambulance Service with minor injuries and was taken to the Valley Regional Hospital where he was treated and released. (Courtesy photos).