LEBANON, NH–On the afternoon of May 26, Daniel Cowdrey was arraigned at the Lebanon District Court on the charges of Negligent Homicide and Felony Aggravated Driving under the Influence of Alcohol. He was ordered held on $25,000 cash bail. 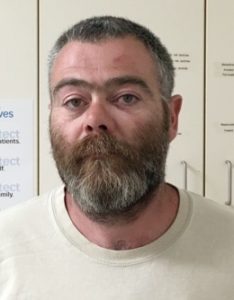 On Wednesday, May 25,  at approximately 8:58 p.m. the New Hampshire State Police Troop D was notified of a motor vehicle crash on Interstate 89 Southbound in the area just south of Exit 20. The initial investigation revealed that a green 2009 Subaru Legacy operated by Daniel Cowdrey, age 38 of Hartland, VT, was traveling northbound in the southbound lane of Interstate 89. Simultaneously a red 2015 Nissan Versa operated by Ellynn Koelsch, age 34 of North Kingston, RI, was traveling southbound in the same area. There was also a passenger in the Nissan Versa who was identified as a 4-year-old male child also of North Kingston, RI.  In the area just south of Exit 20, the two vehicles collided in a near head on fashion, said authorities.

The initial investigation also revealed that the operator of the Subaru Legacy, Cowdrey, suffered minor injuries and was transported to Dartmouth Hitchcock Medical Center. He was arrested at the hospital and charged with felony aggravated Driving under the Influence of Alcohol. The four-year-old child was transported to Dartmouth Hitchcock Medical Center in Lebanon with serious injuries.  Koelsch sustained life-threatening injuries on scene and succumbed to her injuries on scene.