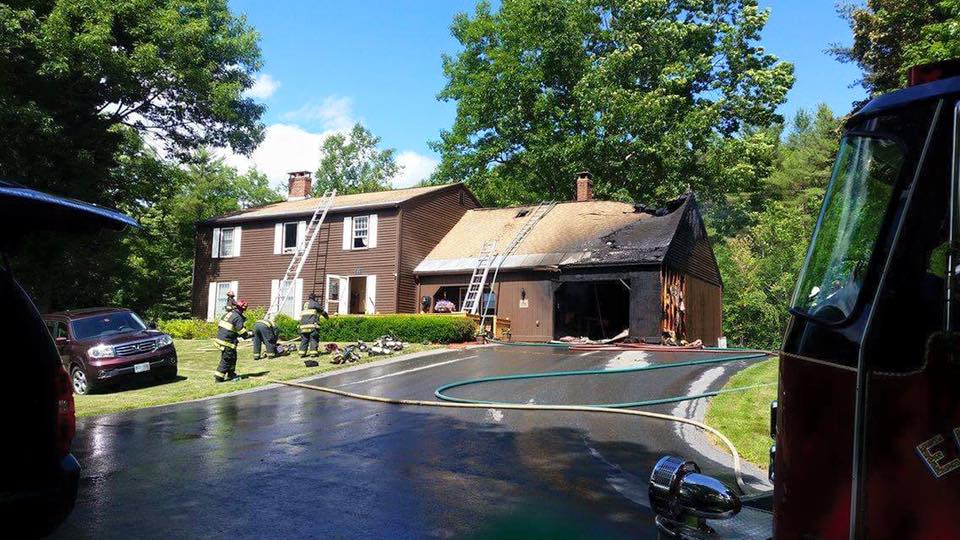 CLAREMONT, NH–At about 2:00 p.m. Saturday, the Claremont Fire Department was dispatched to 52 Cat Hole Road for a report of an ATV on fire, inside an attached garage. The duty crew responded with an engine and a ladder. While in route, the duty officer also requested a Box 50 which staffs an additional rescue company to the scene. Once on scene, the first arriving officer advised that he had heavy fire conditions in the attached garage and it was spreading to the home. The response was upgraded to a full first alarm assignment, said Chief Rick Bergeron. The initial line was placed into operation on the garage fire itself, in hopes of slowing the fire’s progress into the main structure. Once additional crews arrived, a second line was placed into action and the first line was sent to the second floor of the main house to halt the advancing fire. A vent hole was cut in the roof of the garage addition above a couple of second floor rooms, and crews were able to stop the fire’s progress just short of the main house. The fire was called under control at around 3:15 p.m. with overhaul and final extinguishment taking another hour.
Although firefighters were able to prevent the fire from directly communicating with the main house, that part of the building did incur varying degrees of heat, smoke and water damage. The garage addition, including a family room and a couple of small second floor rooms above the family room, were heavily damaged by the fire. The cause of the fire has been tentatively placed on a battery charger that was connected to the ATV that was parked in the garage. The listed building owner is Antoinette Sicard, and the owners stated that the property was covered by insurance. There were no civilian injuries at this fire, but two firefighters did sustain minor burns that did not require transfer to a medical facility.
The fire was just outside the hydrant system, requiring mutual aid tankers from Charlestown, Cornish, Newport, Plainfield and Meridan. Additional units from Newport and Ascutney, VT, also provided coverage to the Claremont station.