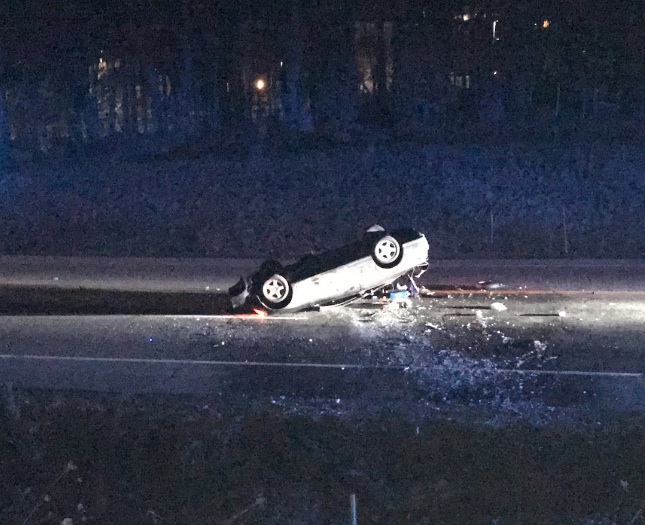 LEBANON, NH–On March 4 at approximately 12:48 a.m., Lebanon Police and Fire units responded to a report of a motor vehicle accident, involving a roll-over, just north of the Centerra Parkway entrance on Route 120 in Lebanon.
“Upon arrival, it was learned that a female driver had driven her vehicle over a snowbank on Colburn Hill and traveled for approximately 30 feet in the air before striking the ditch and ending up on its roof,” reported Lebanon Police Chief Richard Mello in a press release. “This was a single vehicle accident.”
According to Mello, Jensie Pliego, age 31, of Cindy Avenue in Claremont, was arrested and charged with Aggravated Driving While Intoxicated with Serious Bodily Injury, a Class B Felony; Aggravated Driving While Intoxicated – Passenger Under the Age of 16, Class A Misdemeanor and Reckless Conduct, a Class A Misdemeanor. Pliego was taken to the hospital from the scene with possible serious injuries to her neck and knee.
Two passengers also sustained serious bodily injury. An adult male, age 56, also of Claremont, suffered a broken back, and a 10-year-old juvenile suffered possible fractured fingers. The adult male had to be extricated from the vehicle by Lebanon Fire. Both were transported to DHMC for treatment of their injuries.
Pliego was released on $5,000 Personal Recognizance Bail and will be arraigned in the Grafton County Superior Court on March 19.