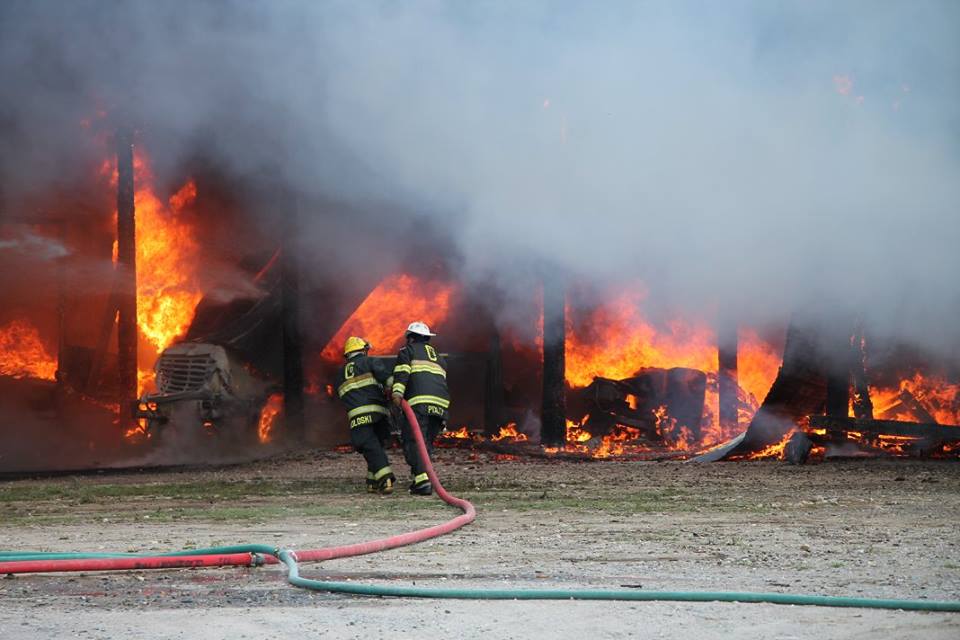 City Fire Caused By Kids Playing With A Lighter

At 1404 hours, on Wednesday, July 13th, the Claremont Fire Department was dispatched to a reported barn fire at 165 Sugar River Drive. The duty crew responded with an engine and a ladder truck from their location, while out on a training detail. Car 1 also responded directly to the scene and arrived there at 1408. Multiple reports, indicating a working structure fire, resulted in an early call for a first alarm assignment to the scene. First arriving fire units reported a large pole barn structure with heavy fire involvement and possible exposure concerns.

The first due engine dropped its 4” line at a nearby hydrant and laid a supply hose into the property as it accessed the rear lot location of the barn. Crews initially cooled the ‘Delta’ side of the building with the engine’s pre-piped deluge gun and then transitioned to a 500 gallon per minute portable monitor that was deployed to the front of the structure. Claremont’s Engine 2 was positioned toward the ‘Bravo’ side of the structure (which is opposite ‘Delta’) and placed an attack line into operation, controlling the fire in the first bay of the building. This first storage bay housed a large trash compacting truck that was heavily involved in fire as well. Newport’s Engine 2 was sent to the neighboring properties located on Case Hill Road to protect buildings that were being affected by the heat of the primary fire. Newport’s crew tied into a hydrant on Case Hill Rd. and deployed attack lines to the ‘Charlie’ side of the incident cooling the sides of two neighboring structures to prevent their involvement. After protecting the exposure buildings, Newport then assisted with the final extinguishment of the primary structure. The fire was called under control by command at 1443 hours.

Due to the heat of the day, Crews from Cornish, Meriden, Charlestown, Ascutney and West Weathersfield were cycled through the scene during the overhaul process. The same communities provided coverage to the City at various times throughout the incident. There were no injuries reported and the last unit was back in quarters at 1740 hours.

The cause of this fire is being attributed to juveniles playing with a lighter inside the building. The property is owned by Mr. & Mrs. Robert Picard and the owners did state that the structure was insured. However, it is unclear at this time, how many of the vehicles and equipment within the building were insured. (Bill Binder photo).