CLAREMONT, NH–Shortly after 1:00 a.m. on Tuesday, Aug. 30th, the Claremont Police Dept. was called to Dusty’s Cafe on Pleasant St. for a report of a burglary. The initial investigation into the burglary by the Patrol Division and the Criminal Division revealed that Scott Berry, age 35, Claremont, NH, was suspected of breaking through the wall of an adjoining business and gaining entry to Dusty’s Cafe. Once inside, Berry is alleged to have stolen an undisclosed amount of cash from the business. After allegedly taking the cash, Berry exited through the same wall that he initially entered through. Security camera footage from both businesses was crucial to identifying Berry as the suspect in this case. 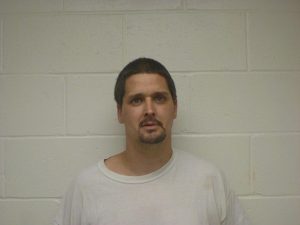 Berry was arrested by the Claremont Police Dept. as approximately 2:20 p.m. on Tuesday, Aug. 30th, for Felony Burglary and Misdemeanor Criminal Mischief. Berry was arraigned today in the 5th Circuit Court, Claremont District Division where pleas of not guilty were entered, bail was set in the amount of $25,000 cash only, and a probable cause hearing on the felony charge was scheduled for Sept. 8 at 1:00 p.m.