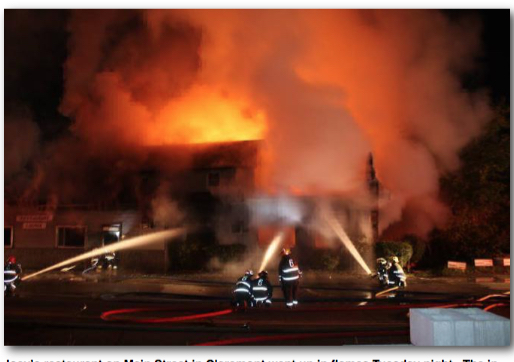 On July 11, 2018, Santo F. Lampiasi, 67, of East Street in Claremont, entered a guilty plea for one count of felony arson.  Superior Court Justice Brian T. Tucker sentenced Lampiasi to serve 12 months stand committed at the Sullivan County House of Corrections and to 5 years of probation upon his release.  Lampiasi was also ordered to pay $1,240 in fines.  The restaurant belonged to his son and was insured at the time of the fire.

“Arson cases can be very challenging to solve and successfully prosecute.  While this case took almost four years to resolve, it is a very normal occurrence for these complex cases to remain open for two to three years or more.  Our ability to combat these crimes is a direct result of the innovative efforts and the collaborative multi-agency dedication to stay the course and hold those responsible accountable,” said Deputy State Fire Marshal Keith Rodenhiser.

The quick-moving fire devoured Joeyʼs On The River that night, destroying a landmark building in Claremont. More recently home to Dimickʼs restaurant, those with longer memories would recall that the building housed the popular Coteʼs Restaurant decades ago. At 8:46 p.m., on the evening of September 9, the Claremont Fire Department was dispatched to Joeyʼs on the Water Restaurant for a reported structure fire. . The fire was called under control at 10:45 p.m., with an additional three hours being estimated for overhaul operations. Fighting the fire was made more difficult with the Sugar River at the backside of the building, making access at the rear impossible.

The Claremont station was covered by an engine from Cornish that night, as well as a ladder truck from Newport. Golden Cross Ambulance provided emergency medical coverage to the call while the Claremont Police Department controlled scene security and rerouted traffic around the affected area. The building continued to present many areas of smoldering debris, and fire crews remained on the scene throughout that night.

Between 2010 and 2014, U.S. fire departments responded to an average of 261,330 fires which were intentionally set.  Losses resulting from these fires included 440 civilian deaths, 1,310 civilian injuries, and $1 billion in direct property damage, according to the National Fire Protection Agency.